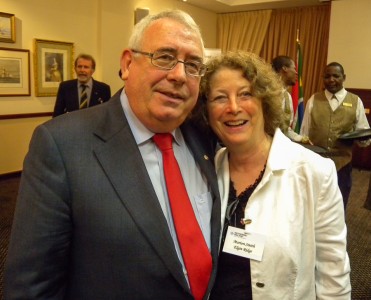 I was honoured to have lunch yesterday at the Commodore Hotel, Cape Town, with the Irish ambassador, Mr Brendan McMahon and the visiting Irish trade delegation.  In addition to the Irish trade delegation, led by Ireland’s Minister for Trade and Development, Mr Joe Costello, TD, several Irish business owners, who now live in South Africa, also attended.

The charitable organisation, The Niall Mellon Trust, was well represented with members wearing T-shirts showing they have now built over 20,000 houses in townships, housing some 100,000 people. Follow the link to their website

South Africa is Ireland’s fifth largest trading partner and it was announced that a contract worth Euro 500m had been won by an Irish company to build wind farms in SA. Ireland has been particularly successful in the technology sectors, and it is expected that this visit will establish not only more trade to South Africa, but also encourage South African businesses to expand into Ireland.