Original article by Jamie Goode on his Wine Anorak Blog

Lunch at the Glasshouse, Kew, with Brian and Marion Smith of Elgin Ridge

Kew’s Glasshouse has to be one of the best places to lunch in London. It’s the sister restaurant to the equally impressive La Trompette in Chiswick, and together this pair of gems gives those of us out west reason to feel grateful. They both possess brilliant wine lists alongside highly creative and utterly delicious cooking, and are very reasonably priced.

I was guest today of Brian and Marion Smith of Elgin Ridge, an exciting new producer in the Elgin region of South Africa. They moved there in 2007 after selling their Kingston-based IT business. They’d always wanted to do a vineyard project but it took them a while to decide where.

Initially they had thought about making sparkling wine in the south of England, but the land was just too expensive. Then they considered France, but found that the wine industry was in turmoil and most of the properties on the market were there because the people were struggling to sell their wine, and they were expensive to boot.

So they turned to South Africa, and a property in Elgin that ticked all the boxes. Marion had first visited Cape Town in 2002, and liked it so much she came home having brought a holiday flat. Brian visited in 2003 and while he was staying there tasted a Sauvignon Blanc that he liked so much (the debut vintage of Iona), he went to visit the owner, Andrew Gunn. They became friends.

The combination of affordable land, and knowing people there led to the purchase of an abandoned 10 hectare apple farm in 2007. ‘It turns out that we have wonderful soils,’ says Marion. ‘It turns out this was more luck than judgement,’ Brian adds. ‘It is great that we were able to plant from scratch.’

They have so far planted 4.5 hectares, with 3.5 hectares of Sauvignon Blanc and half a hectare each of Chardonnay and Pinot Noir. They are organically certified, and as of this year Marion – who looks after the vineyard – has decided to go biodynamic, a decision prompted by a visit from Monty Waldin. They have just bought two Dexter cows, to complement their ducks. ‘The dogs and cats don’t know what to make of them,’ says Brian.

Production is 15 000 bottles this year, rising to 20 000 next year. The goal is to peak at 40 000 bottles. Winemaking consultancy is from Niels Verburg, who was initially reluctant to fill this role, but has agreed to work for three years with Brian in the winery, with a view to handing over. Kevin Watt has assisted with the viticulture.

We didn’t try the Elgin Ridge wines. I tried them back in March, and was really impressed by the 2011 Sauvignon Blanc, which I rated as one of South Africa’s best. The Chardonnay 2010 was very good, but not quite in the same league. Brian and Marion had just returned from a spectacular-sounding tour of Burgundy, so they ordered a couple of Burgundies from the list with the help of sommelier Sara Bachiorri, who was really impressive – particularly in the way she dealt with the low level taint in one of the wines, insisting on opening a second bottle immediately. 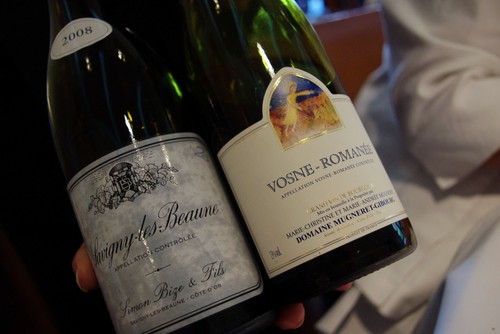 And the food? I had an intruiging starter of rabbit cannelloni with cumin and carrot, peas, fèves and mustard velouté. The flavours really worked well together, and the presentation was excellent. The cumin gave it quite a spicy, almost Indian character. My main was simply majestic, and one of the best things I have eaten this year. Miso glazed pork belly with spring greens, shitake and pork pastilla, soy and enoki broth was both utterly delicious, but also full of interest. The pastilla worked really well with the super-tender, flavoursome belly pork strips.

Simon Bize Savigny Les Beaune 2008 Burgundy A cracking white Burgundy. Very fine, fresh, mineral, slightly matchstick nose is taut and inviting. The palate is fresh and nicely intense with lemony acidity and attractive minerality. Very focused, and delicious. Could even do with a year or two to open out more. Will last a lot longer. 92/100

Mugneret-Gibourg Vosne Romanee 2002 Burgundy This may be just a village level wine, but it’s fabulous, and in a great place now. Elegant, precise and mineral, yet generous with it. Some spicy, grainy, fine tannins under the red cherry fruit. Grippy, fine and expressive with hints of earth. Just so good for drinking now, but the structure suggests it will be even better in a year or two. 94/100